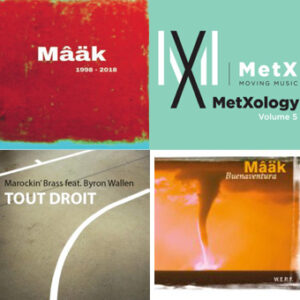 Alien life, the Bermuda Triangle or the primal sound of MetX… According to science, they must exist even in the absence of hard evidence. Let’s give it a try as far as our sound goes: discover the MetX MiXtape and playlists with musical influences from our artists.

MetX MiXtape
Seb Bassleer of Rebel Up selected some fifteen memorable MetX songs and swung them in a sticky mix of over 60 minutes. 100% Marockin’ Brass meets Mâäk feat. VelotroniX with a big splash of Fanfakids, fresh shreds of Remork & Karkaba and AGO! Benin Brass from the barrel. Enjoy!

Playlists of our music makers
Are you curious to know the musical influences of the people behind BRUiTAL, Mâäk or Marockin’ Brass? Take a glimpse into their ears via these Spotify playlists: