Imane Guemssy is a young musician originary from Casablanca. From an early age she developed a particular interest in gnawa music and now uses the rhythms and vocal lines to create a contemporary repertoire.

Imane was already playing in some college bands when she starts participating spontaneously at gnawa ceremonies -or lila’s- in her birthplace Casablanca. Mâalems like Hmida Boussou or Mahmoud Guinea introduce her to these ceremonies, mainly frequented by male musicians. She learns to play the guembri, a traditional lute, and percussion instruments like krakeb and t’bel.

At her arrival in Belgium in 2013, she joins the gnawa group Karkaba. This project by MetX offers adolescents in Brussels the possibility to learn the gnawa culture and music. She meets Badr Derras, with whom she already played together in Morocco via mâalem Hmida Boussou, and Karkaba’s coordinators Mohamed Saïd Akasri en Driss Filali. The latter plays with Badr in the gnawa-jazz group Marockin’ Brass.

Inspired by all these different gnawa masters and musical influences, she starts to rearrange some traditional songs. In 2019 MetX offers her a wild card to develop a contemporary gnawa repertoire together with other female musicians. As the group Tsoukina they organise open rehearsals where interested musicians can join them. 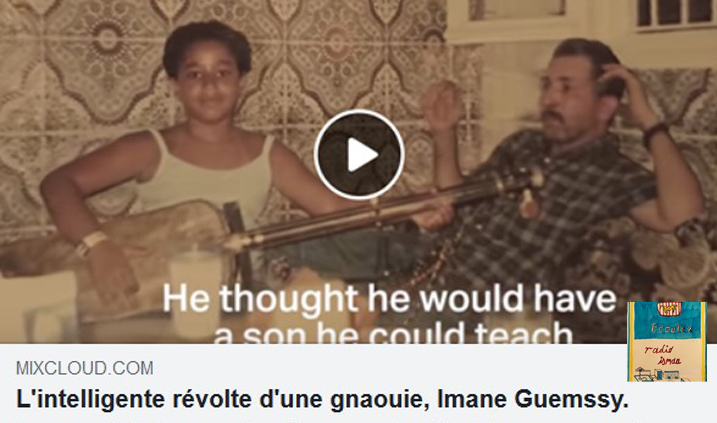