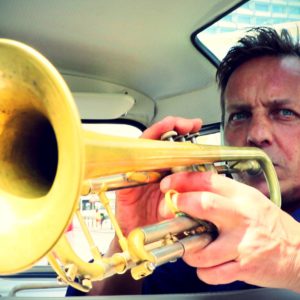 It’s a mistery where he gets the time and energy from. Laurent Blondiau, trumpet player and artistic coordinator at MetX, keeps on putting up new projects and ideas. At the same time, he manages to keep the bar high and meet expectations.

Key in all his musical adventures is the jazz collective Mâäk, which he founded in 1998. Ever since, he tends to find a balance between improvisation and sheet music while regularly tuning his jazz sound with African (trance) rhythms.

Laurent has performed with numerous great musicians from all over the world. But the Mâäk Quintet stays his favourite launch pad to explore new musical horizons. Together with Jeroen Van Herzeele, Michel Massot, Samuel Ber and Grégoire Tirtiaux he experiments with new sounds, rhythms and harmonies. Hence, the quintet’s compositions remain wonderfully spontaneous and improvised. Yet flawlessly orchestrated.

In 2014, Laurent invites 11 other musicians from the European jazz and improvisation scene to join the quintet. Together they form the bigband MikMâäk: 16 top musicians with astonishing personalities, a repertoire composed by different band members and a savoury mix of sheet music and improvisations. After their debut album in 2015, they release a second album in October 2019 with live-recorded material.

Laurent and his fellow Mâäk musicians have always been inspired by projects that mix Western improvisation music with traditions from other cultures. To name but a few, they worked with Les Gnawas du Maroc (Al Majmaa – 2004), Les Chasseurs Bambara du Mali (Djekoulou – 2005), South-African poets Kgafela oa Magogodi & Samantha7 (Stroke – 2008) and a group of dansers from Burkina Faso (Kawral – 2015).

Today, the link with the African continent is stronger than ever. With Belgian-Tunesian singer Ghalia Benali Mâäk performs the project MwSoul. As Mâäk KOJO they fuse their trademark sound with that of the Anagoko’s, a Beninese family of Vodun musicians. And via the educational project Les Ventistes du Faso, Laurent and saxophonist Toine Thys help develop local brass sections in Burkina Faso.

It is clear that the musical activities of Laurent Blondiau don’t have any boundaries, what makes him one of the most surprising and fascinating figures of the jazz scene in belgium. After being rewarded European revelation by l’Académie du Jazz de France in 2009, he won the Sabam Jazz Award in 2015. One year later he joined MetX as co-artistic coordinator.