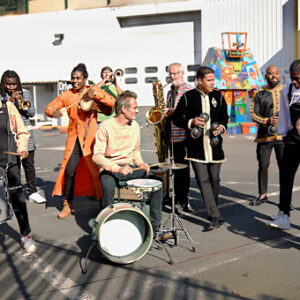 In the run-up to the COP26 climate conference in Glasgow, the Scottish music group Oi Musica invites music makers worldwide for a powerful climate wake-up call. Luc Mishalle, Jo Zanders and other MetX musicians made a Brussels arrangement of Karine Polwart’s song Enough is Enough, together with a matching video clip.

The MetX version of Enough is Enough has a vintage Brussels touch: brass musicians from the jazz and global sounds scène, North and West African rhythms plus multilingual vocals and rhymes. All this adding up to a powerful call for climate action in English, French, Arabic and Fon (Benin). For the recording with Roel Poriau, Luc and Jo gathered some other MetX music makers and befriended musicians: Driss Filali, Hicham Bilali, Véronique Delmelle and Eric Yovogan (Marockin’ Brass), Joris De Beer (Remork & Karkaba) plus Kobena Bedu and the Fabotastix-anciens T.B.Wèh.

The clip was filmed by Iwona Pom and Bert Minnen at the industrial reconversion site of Circularium in Anderlecht. It’s featured with all the other clips from the campaign on letitgrow.scot and social media. On 12 December Luc, Jo and the other musicians will play the track live at Darna’s Winter Event @ AB.

Read more about Let it Grow - Music for COP26