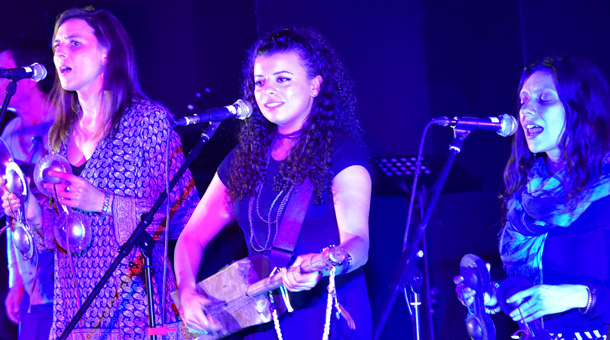 March 8 is International Womens’ Day. The ideal occasion for some sneak preview concerts by female gnawa group Tsoukina. On March 7 they play first at the Chaabi Habibi event at UPA, after which they join the all womxn line-up of the Intersections party at VK. Parallel to these try outs, they further develop their repertoire during weekly rehearsals at MetX and a residence at Zinnema in May.

Tsoukina is a new group started by Imane Guemssy and a couple of friends musicians. Via a wild card from MetX they create original compositions based on traditional gnawa songs. To this end, they receive rehearsal space, artistic coaching and some opportunities to perform on stage. Last year they popped up a first time at our MetX Solidarity Jam, in February they played a short open air set during a small-scale neighbourhood event in Les Marolles.

At the eve of International Women’s Day, they perform some new try outs: On March 7 they play in Anderlecht at Chaabi Habibi, a festival aiming to break persistent taboos around femininity via the means of popular Moroccan dance and music. The event features concerts, workshops with chaabi dancer Esraa Warda and a lecture by Hélène Sechehaye, who recently published a study on gnawa culture and maroxellois in Brussels. Later that night the musicians of Tsoukina will cross the city canal towards Molenbeek, where they will perform together with other female artists at VK’s Intersections.

These try outs are in the first place meant to gain experience. The exchanges and lessons learned help the musicians to grow as a group and offer stepping stones for them to evolve both musically and artistically. On top of their weekly rehearsals at MetX, they will be resident band at Zinnema in early May. Their first official performance will be as Mâäk Quintet’s special guest at the Brussels Jazz Weekend.