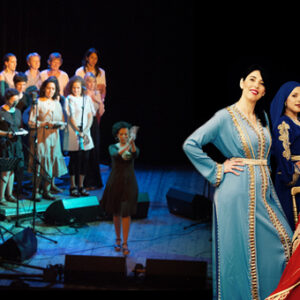 Early March, we took part in MUSIKAA, the project of Klarafestival and Bozar in Molenbeek. Together with VK, we paid tribute to two musical traditions from Morocco that have been passed on orally by women: Izran & Chaabi. With an interactive lecture on 7/03, a residency from 9-12/03 and a series of try out concerts on 13/03.

Singer and MetX musician Laïla Amezian has been working for years on the Chaabi tradition, an umbrella term for popular music from the cities of Morocco. This genre is mainly orally transmitted by women and thus came to us in the 1960s in the slipstream of the Moroccan immigrant community. Yet this musical tradition is little known in our parts. That is why Laïla’s project Chaabi Habibi wants to highlight this unique, original heritage that Belgian-Moroccan women have been developing in the shadows for four generations.

Polyphonic arrangements of traditional Chaabi songs
From this year onwards, she further develops her women’s choir Fatmas de Belgica under the wings of MetX. She brings them together with a.o. the singer-percussionists of Les Sheikhs Shikhats & B’net Chaabi. The idea? Building on the traditional Chaabi repertoire by adding contemporary vocal and rhythmic elements.

Would you like to join? Laïla and her choir welcome singers of all artistic levels and horizons. Rehearsals take place every Tuesday evening (18:30-20:15) at MetX. Contact us for more info

Workshops, residency and try-out during MUSIKAA 7-13/03
Their first joint project took place as part of MUSIKAA in Molenbeek. With an interactive lecture on 7 March, a residency from 9 till 12 March and try out concerts on Sunday 13 March. Laïla, B’net Chaabi and Les Fatmas de Belgica shared the stage with another project on orally transmitted musical traditions from Morocco: Izran Revisited, a long-term project by GC De Vaartkapoen in collaboration with the Molenbeek singer Fatoum on sung poetry from the Rif mountains.