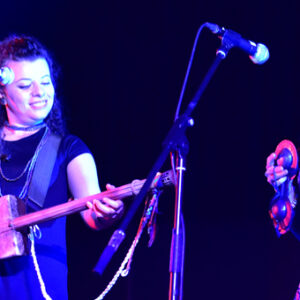 Imane Guemssy’s project will stand on its own two feet. Thanks to a Carte Blanche from MetX, she gathered a completely female gnawa group around her in 2019. Together, they started to develop a contemporary repertoire. After launching the project at MetX, Imane will now run the group on an independent basis.

Tsoukina is the brainchild of the young musician Imane Guemssy. At the invitation of MetX, Guemssy gathered a few other musicians around her to form the first female gnawa group outside Morocco.

During rehearsals at MetX they started to develop their own repertoire. Authentic arrangements of traditional songs, adapted to the higher female voices and to which they added the guembri and krakebs. Parallel to the rehearsals, the group also grew stage presence during some try-outs.

After a fruitful collaboration within the framework of the MetX Carte Blanche 2019-2020, Guemssy and the Brussels production house consider the time ripe to run the group on an independent basis.