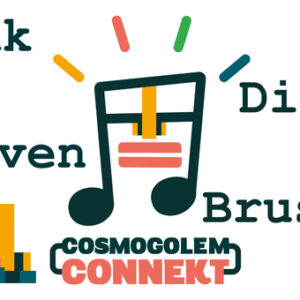 A lot of youngsters are having a hard time during this pandemic. In Brussels, Leuven, Diest and Genk, organisations are joining forces to artistically reinforce the voices, wishes and dreams of young people about what it means to live together in the city. They focus on the question “Hoe dream jij notre stad?” (“How do you dream our city?”)


Encouraged by the CosmoGolem – a work of art by Koen Vanmechelen – children and teenagers from different cities will work creatively around existential questions such as: “What are your deepest feelings and wishes for the future?” or “How do you dream the city when we can come together again?”. They do so by participating in physical workshops in collaboration with inspired artists (where and when allowed) and through online challenges on social media.

Artistic workshops and inauguration of a new CosmoGolem
In Brussels there are workshops in collaboration with MUS-E Belgium, Cultureghem, Maks vzw, Fanfakids and Urban Center Brussel. In Genk, five mini-CosmoGolems were sent out to different neighbourhoods. The coloured statues, each linked to an element of nature, are the inspiration for creative workshops led by Villa Basta and OpUnDi Genk. Preparatory projects are also starting in Diest and Leuven in collaboration with a.o. Trill, Kwartiermakerij and Arktos.

At the beginning of May, youngsters in Anderlecht will build a brand new giant CosmoGolem during a participatory construction weekend under the guidance of MicroMarché. The four-metre high wooden giant will be officially inaugurated in mid-May during a four-day ‘Celebration Wave’. This will start in Genk on the Dag van de CosmoGolem (“Day of the CosmoGolem”) and will move past Diest and Leuven towards Anderlecht for a festive climax with various artists and groups from MetX. 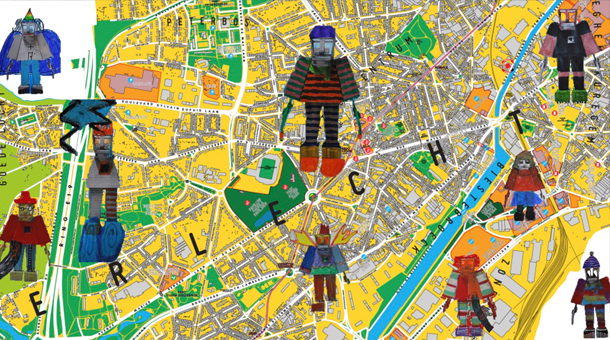 In the run-up to the official inauguration of the CosmoGolem in Anderlecht, young people can share their creations online with participants from other workshops and cities. Using Instagram and TikTok, they can also trigger each other and the artists creatively with challenges involving music, dance, theatre, etc.

CosmoGolem Connekt is a project by MetX, B-Classic and Studio Koen Vanmechelen, in collaboration with a network of local partners in Brussels, Leuven, Diest and Genk. With the support of the Flemish Government – Cabinet Benjamin Dalle, Minister for Brussels Affairs, Youth and Media.