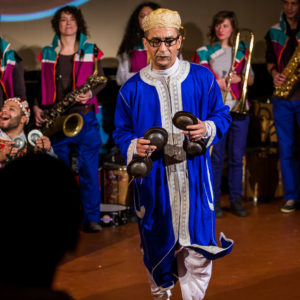 Mohamed Saïd was 12 years old, when he almost accidentaly began playing music. He was a part of the youth centre of Molenbeek and creates a music atelier with his brother and a friend. This soon became their pastime and they became real autodidacts. One day another brother, who was even more into music, asked him to play together.
They become the first group in Brussels to play traditional Morrocan music. This allows them to do warm-ups for some succesful Morrocan groups like Nass El Ghiwane in venues like Ancienne Belgique, le Cirque Royal, Les Halles de Schaerbeek, Forest National …

The quatro becomes known and this opens new doors. They get requests from everywhere: Belgium, the Netherlands, England, Germany … They play at Morrocan weddings everywhere in Europe.
Their reputation influences the Morrocan youth in Brussels and elsewhere. The group stops in 1997 and two years later Mohamed Saïd starts his own non-profit association: Oulad Bambara Gnawa de Bruxelles (first non-profit association gnawa in Europe).

Many gnawa’s and Mâalems from Europe and Morroco visit them. The non-profit association organises workshops in music, dance and traditional costumes.
In 2003 they play at the internation percussion festival in Bangkok. They play at Couleur Café in 2001, 2007 and 2008.

In 1999 Luc Mishalle discovers the non-profit d’art folklore gnawa and together with MetX, they start doing little projects.
In 2006 Karkaba comes to existence. Mohamed Saïd is one of the teachers, teaching gnawa-music to young people and adolescents from all origins, in order to make open the culture to a larger public.
After a while some Karkaba members start their own group, playing at Morrocan weddings in and outside of Brussels.