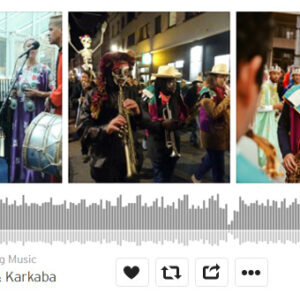 Our gnawa fanfare releases three new tracks: own arrangements of the gnawa-classic “Tchor Kerira” and the Latin American traditional “Maria Theresa”, plus an arrangement of Luc Mishalle’s “Afriquia”. You will also recognise the latter song as the soundtrack for their brand new video!

The new video portrait is a part of Musikaa, a collaboration between Klarafestival and the municipality of Molenbeek. It was made by young people of the studio Ciné-Photo at the Maison des Cultures under supervision of Molenzine. They filmed the musicians of Remork & Karkaba, partly from Molenbeek, while they played the song “Afriquia” on the industrial site that houses De Vaartkapoen and Recyclart.

Besides “Afriquia” the group also releases own arrangements of the gnawa-classic “Tchor Kerira” and the Latin American traditional “Maria Theresa”. The latter has been rearranged by lead saxophonist and composer Luc Mishalle together with mexican musician Israel Alonso for Dia de Muertos dans les Marolles. These three tracks are the first in a series of releases by different MetX groups as part of the MetXology compilation.

Discover the releases on SoundCloud: