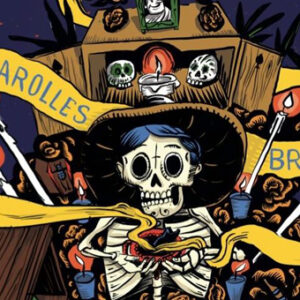 The Marolles were getting ready for the 3rd edition of Dia de Muertos. This year, the Mexican Day of the dead commemorated the victims of the corona crisis. With the construction of an altar, workshops, intimate concerts and a sober celebration on the Place du Jeu de Balle.

In recent months we have all learned to look differently at life, death and everything in between. At first full of doubt, anger and fear about what happened. Then again determined and hopeful about what will be possible (again). Therefore, the team behind Dia de Muertos in the Marolles thought it was important to give the health crisis a place in the 2020 edition.

On Monday November the 2nd, a sober celebration took place at the Place du Jeu de Balle instead of the planned finale, which has been postponed to next year. The mythical Quetzalcóatl and Adriana, the giant skeleton created at the occasion of MegafoniX, would’ve made their appearance with music by Remork & Karkaba feat. Dirk van der Harst and The Ledebirds, Mariachi Sabor a México & Banda Sorochj. A colourful gang that we hope to see playing together in 2021!