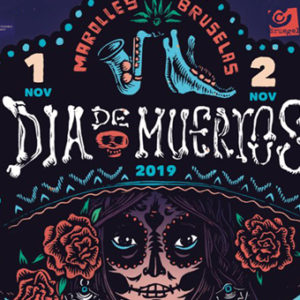 In October MetX participated again at the celebrations of the Mexican Day of the Dead in les Marolles. Young and old joined workshops around a.o. music, dance, decoration and make-up. The climax was a festive parade with music from the Mexican artist Israel Alonso and Remork & Karkaba.

The celebration of ‘Dia de Muertos’ has recently become very popular in Brussels. After the successful first edition, Centre Culturel (CC) Bruegel gathered once again residents, schools, merchants and other actors from the Marolles neighbourhood to organise a contemporary version of this Mexican Day of the Dead.

MetX joined in for the second year in a row. Musician Veronica Campos led a series of percussion workshops during autumn break, while Vital Schraenen helped with the construction of a festive death march on Saturday the 2nd of November. Musician Israel Alonso had prepared a grisly but catchy repertoire together with gnawa-brass band Remork & Karkaba, which was called ‘Chile Frito’ for the occasion. On November 3 Israel and the children who’d participated at the workshops also performed at the Big Bang Festival in BOZAR.