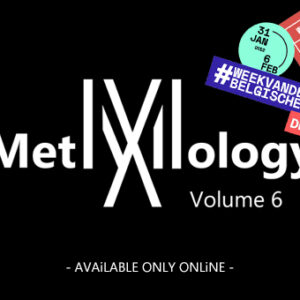 Our brand new compilation featuring the newest and most original sounds from the MetX universe. Ready to explore Mâäk’s musical freedom, BRUiTAL’s intriguing soundscapes, the Fanfakids’ youthful energy or the generous cross-fertilization of gnawa music, jazz & brass by Marockin’ Brass and Remork & Karkaba?

One year of composing, rehearsing and recording… And here it is: our MetXology Volume 6 showcasing the rich variety of both professional productions as participatory projects at MetX. For the first time we didn’t release it as a CD or vinyl, but you can enjoy it freely online via SoundCloud & Spotify..

Release Belgian Music Week 31/01 – 6/02
Each group releases a couple of tracks a day to keep the doctor away. On Monday 31/01 some feature in a Belgian World Music Network playlist, broadcasted online and in the Brussels metro stations. Radio presentator Sarah Thery also highlights it in her weekly chronicle on RTBF – Musiq3.

As from 6 February, you can binge-play the entire MetXology Volume 6 playlist featuring all 9 tracks on SoundCloud. And of course, move your feet to them live during spring and summer concerts, street parties and festivals near you!

Ever imagined Red Riding Hood marrying the Wolf? This traditional folk tale inspired the underground noise makers of BRUiTAL to marry and melt their punk energies into new, exciting soundscapes. Should have roared in the streets of Brussels during Zinneke Parade 2020 – theme “Aux Loups!” (Crying Wolf). Now blasting out of your speakers if you dare to go up to’eleven’.

Written by saxophonist Grégoire Tirtiaux, Sémille-Someille refers to Man and his semi-consciousness. About his inconsistencies and his impossibility to reconcile what he would like and what he should do. From his state of spiritual semi-sleep (‘semi-sommeil’ in French), would he be able to fall into a semi-awakening state? And let the seeds of wisdom that lie dormant in him germinate? Through music, the Quintet aims to speak to the soul where words sometimes fail.

Written by Louis Favre. Based on typical African rhythmes. An evergreen in the Fanfakids’ repertoire.

Luc Mishalle, musician, composer and founder of MetX, once mentioned Afriquia amongst his all-time favourites. Mishalle: “I’ve been using it in many circumstances and recorded it many times. It’s been played by rock bands, jazz groups, brassbands & harmonies and it has been sung by choirs who put new texts to it. It focuses on two chords, a pentatonic scale and a question/answer structure. One the one hand it is a very simple piece, but then, it is hard to play correctly. All to do with timing!

In times of pandemic, the need of live concerts makes us do the strangest things. The musicians of BRUiTAL, for example, started to date a group of dancers. Drenched in black and in search of revolution, our trance percussionists plus totemists summoned the most stunning choreographies out of their new partners in mime, transforming them into the Sun Girlz. And then let there be light!

For Papa Ours, Laurent Blondiau started from a superposition of 3 separate melodic lines on trumpet, alt sax and tenor sax. He then imagined a question-answer game of 2 repetitive loops, each with different lengths. As a reference to the folk tale ‘Goldilocks and the three bears’, where each bear adds a distinct voice to the story, he called the track ‘Papa Ours’ (Daddy Bear).

Listen to Papa Ours – as from Friday 4 February

Composed by Manu Paulo Cristo, Prince Folowosele and Ousman Kamara, some teenagers of the Fanfakids. They fuse different rhythms and musical genres they learned and started to teach themselves throughout the years.

A traditional piece of Latin music rearranged by mexican musician Israel Alonso (Sonosfera, Remork & Karkaba). Bringing back to life the spirit of ‘Dia de Muertos in Les Marolles’ at every play. As one of the artists behind this annual event, Alonso dragged along Remork & Karkaba into an unique Brussels celebration of life and the departed. Written and recorded in 2019, this gnawa percussion powered version of Maria Theresa is already an immortal in the repertoire of Remork.

Zidzid means ‘come on, hurry up’ in Moroccan. The track features a medium 6/8 tempo in the popular chaabi genre, with Marockin’ Brass’ unique rhythm section of bendirs, krakeb and drums. Short melodic phrases unfold layer after layer. The whole flowing into a solo by Véronique Delmelle on barytone sax, on which Abdessamad Semlali sets in a popular chant in typical Q&A style.

Listen to ZidZid – as from Saturday 5/02

Discover our MetXology Volume 6 playlist - as from 6 February