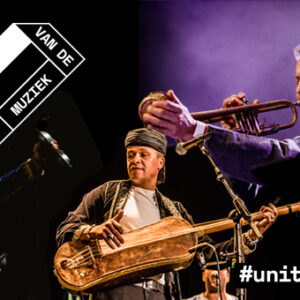 The week of 8 till 14 February has been one big declaration of love to Belgian music. Together with VI.BE, VRT and the broad music sector, we’ve put homegrown music in the spotlight. On the menu: gnawa-jazz with MXDO @ Lagrange Points, MikMâäk @ De Bijloke, BWMN Showcase Night & much more!

Muziekcentrum De Bijloke invited MikMâäk together with the French top guitarist Marc Ducret. A cherished collaboration between two innovative, free-spirited natures! The concert, broadcasted last December via livestream on www.soundofghent.be, was rebroadcasted on Thursday 11 February as part of #unitedwejazz via Facebook.

On Friday 12 February Luc Mishalle and Driss Filali performed together with Hicham Bilali as the MetX Diaspora Orchestra, our occasional ensemble with an ever-changing line-up. The concert was recorded at Lagrange Points, a Belgo-Arabic literary café and cultural meeting place in the Marolles:

This online event was created with the support of the Flemish Government | Flanders State of the Art.

On Monday 8 February the annual showcase night of the Belgian World Music Network took place. From 7.30 pm onwards you could discover (for free) some of the revelations from the Belgian folk and global music scene. On the programme: Las Lloronas, Ozferti, Refa (aka Refugees for Refugees) and Kolonel Djafaar, followed by DJs Cheb Runner and SAHЯA. Read more about the BWMN Showcase Night.

The public transport service MIVB/STIB was also on track with Belgian music. On Monday 8 February, you could enjoy a playlist compiled by the Belgian World Music Network in the Brussels metro stations. See you in the subway for Marockin’ Brass, Remork & Karkaba and more Moving Music!