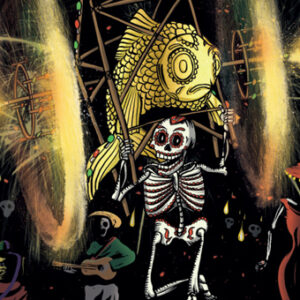 After an intimate version in 2020, we celebrated the dead this year with a whole series of festivities! On the program: workshops for young and old. A giant altar for leaving mementos of the dearly departed. And a finale with no less than four different Día de Muertos processions and Mexican fireworks!

Giant altar for the dead
Just like last year, there was a giant and attractively lit altar on the forecourt of CC Bruegel. During the whole month of November, people could leave their mementos and offerings to commemorate the dearly departed.

Week of workshops & concerts
During Día de Muertos dans Les Marolles, many workshops and activities for young and old take place. In 2021, lovers of Mexican Son Jarocho took part in master classes with Ramón Gutiérrez Hernández, one of the most renowned musicians of the genre. As guest of honour on this edition, Hernandéz also lead a Mexican jam session of Fandango (5/11) and performed together with a.o. Sura from Las Lloronas in CC Bruegel (2/11).

Of course, children and teenagers also had fun with the dead throughout the autumn holidays. MetX organised percussion, costume and plastic art workshops together with Jeugd en Muziek from Tuesday 2/11 to Friday 5/11, in preparation for the festive finale on Saturday 6/11.

At CC Bruegel there were improvisation workshops Circle Songs with Sarah Klenes for teenagers (1 & 2/11) and a performance of the fairy tale “Le Bon Fils” by Ahmed Hafiz for children from 10 years old (4/11).

Four processions with finale on Place du Jeu de Balle
On Saturday 6 November, the entire Marolles neighbourhood was immersed in a colourful celebration which our dearly departed will never forget. No less than four different Día de Muertos processions paraded through the streets with music and festive lights: Remork & Karkaba ft. The Ledebirds, La Nouvelle Filibuste, Mariachi Sabor A México & QuetzalQuatro with the Quetzalcóatl.

Each procession departed from a different starting point:

Around 19h15 they arrived at Place du Jeu de Balle for a grand finale with Mexican fireworks called ‘Toritos’. Followed by a surprise concert at 20h and Latino food trucks until 22h.