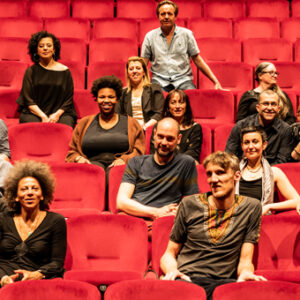 Alluring melodies, enchanting vocals, breathtaking brass instruments and an explosive chaabi groove. Les Sheikhs Shikhats & B’net Chaabi will charm you with contemporary compositions, based on Moroccan repertoires from the end of the 19th century. Discover this joyful band of no less than 18 vocalists and musicians!

Les Sheikhs Shikhats and B’net Chaabi is the first project of our new music maker Laïla Amezian under the wings of MetX. Together with Laurent Blondiau, responsible for the compositions, arrangements and musical direction, she brings together no less than 18 vocalists and top musicians with very diverse backgrounds.

18 top artists with very diverse backgrounds
The line-up features some members of the Mâäk collective, but equally Nabou Claerhout, Toine Thys, Jean Gnonlonfoun, Ahmed Khaili and the group of women singer-percussionists B’net Chaabi. Together with Laïla and her fellow Shikhats, they want to bring to the fore all the strength and beauty of a musical and poetic tradition from the 19th century Morocco.

A tribute to female musicians fighting for freedom of expression through art
Fascinating in all its strength and audacity, this project pays tribute to the Ghanayats and Shikhats, female musicians who fought for freedom of expression through their art. Les Sheikhs Shikhats & B’net Chaabi also highlight a cultural heritage that these singers have popularised throughout Morocco since the end of the 19th century, and which is perpetuated in Belgium.

Creation & program
At the end of April, the group went on a residency at CC Strombeek. They developed a fascinating repertoire: polyphonic arrangements of chaabi and traditional songs on daring jazz arrangements, supported by trance-like rhythms. The premiere in Muziekpublique, broadcasted via livestreaming, was highly praised by both the audience and the programmers!

Want to see them (again)? Don’t miss the Showcase Night of the Belgian World Music Network on 23 May.

The group will also be performing at Brosella this summer. In the run-up to their concert on 10 July, you will be able to get an exclusive insight into the group’s creation process through various audio & video reports: