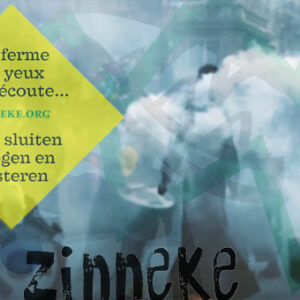 Because of the corona crisis, 20 years of Zinneke will be given an unusual interpretation: a soundscape with testimonies and sounds from participants, Zinnodes organising Simili Parades and a final happening with a.o. BRUiTAL and Fanfakids “Loops”.

Immediately at the start of the first lockdown, all workshops for the parade in May were shut down. Since all participants of the more than 20 Zinnodes couldn’t come together anymore, Zinneke gathered their voices in the form of a soundscape. A colourful collection of testimonies, cries of wolves and sounds of isolated musical instruments, choirs and fleeting brass bands. They streamed the soundtrack on their website and some local radios on May 16, at the time when the parade would have normally taken place.

Inside BRUiTAL @ Zinneke Parade
Also to be heard at the “Parade Imaginaire”: the cries and sounds of BRUiTAL during their first performance at the 2018 edition. Video collective True Blue made unique recordings from the inside of the parade. Relive the Zinneke Parade “Illegal” and the birth of BRUiTAL through this exclusive documentary:

Loops & Fanfakids keep running
Veronica Campos and the Fanfakids stepped into this edition of the Parade as the Zinnode ‘Loops’. After an interruption of a few weeks, they gradually restarted their musical loops and repetitions of rhythmic and danced phrases. Who knows where we may run into them this autumn!

Luc Mishalle and the Zinnode ‘Horde’
Brede School Nieuwland took part in the Zinnode ‘Horde’ with various organisations from the Marolles. The Brussels Music Academy, partner of the Brede School, gave a writing and realisation assignment for the musical part to our music maker Luc Mishalle. He formed a unique orchestra that consisted of 3 parts: the ensemble class of the Music Academy, gnawa percussionists of Karkaba and horns from Remork and Ander Brass. There was one promising rehearsal before the quarantine, after which the Horde reestablished new links, virtual and creatif, between the youngsters from these two Brussels neighbourhoods thanks to the efforts by the artists and partners.

Several Zinnodes wanted to participate at a final happening end of October, to celebrate all the work that has been done for the parade 2020. To avoid big crowds, the time and location were held secret. Unfortunately, this Joyeuse Sortie had to be canceled last minute because of the new corona restrictions.