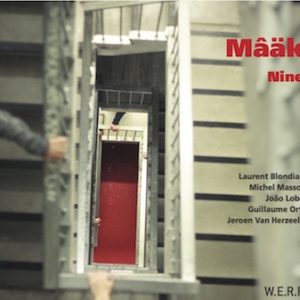 The Belgian jazz collective Mâäk (formerly Mâäk’s Spirit) is known for its unfailing appetite for musical experimentation. Preferably, the group browse through folk traditions from all over the world and mix these influences into their infamous contemporary jazz cocktail.

Think of the highly acclaimed KOJO project, for which they sought out the cross-pollination between jazz and traditional West African rhythms. On their previous album “Buenaventura” (W.E.R.F.110, 2012), they again joined forces with a host of Hungarian musicians.

Today, however, the collective return to their roots. No XL-band, no special guests, but back to the old formula of the quintet with four horns and a percussionist. Within the quintet, we find the following excellent musicians, who have more than earned their spurs in the international jazz scene: trumpet player and founder Laurent Blondiau, saxophonist Jeroen Van Herzeele and tuba player Michel Massot. They are all part of the golden generation, active on the Belgian scene for the last twenty years. The band is completed by two foreign musicians, who both have been part of the collective for a long time: the French saxophonist Guillaume Orti and Portuguese drummer Joao Lobo.