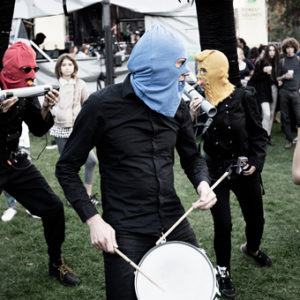 Our punk-style fanfare BRUiTAL is developing a new repertoire. Jo, Vital and their brutal bunch of underground noise makers try out new stuff during pop-up performances at parties and other events. Last weekend, they surprised early birds at the global grooves party Globalicious. In between the workshops and DJ-sets, they gave the party goers a preview of their exceptional universe of sound.

Drenched in black, fuelled by despair, in search of revolution… BRUiTAL‘s 4 percussionists and 4 lo-fi electro-totem bearers didn’t go unnoticed while arriving at La Tricoterie in Saint-Gilles.

At first, people were flabbergasted by the unusual performance. But the acoustic trance percussion and intriguing soundscapes from the mobile totems eventually won them over. The musicians’ energies melted together into one tremendous sonic tour de force, providing some vibrant interludes in between the conferences, workshops and DJ-sets at Globalicious.

BRUiTAL started out in 2018 as a Zinnode, an artistic project for the Zinneke Parade comprising various organisations. Meanwhile, it has transformed into an experimental punk-style fanfare, preparing a new tour. To this end, they do try-outs like the one at Globalicious and during the opening of the new Tivoli neighbourhood end of February.

Would you like to see the group live? They’ll be touring this summer at the Sint-Paulusfeesten, Esperanzah and other street festivals and events. Keep an eye on our agenda, newsletter and facebookpage for all updates!