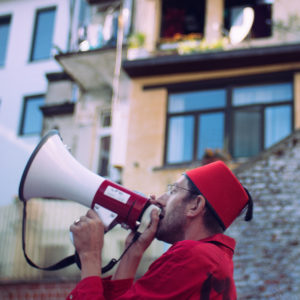 Vital Schraenen is a creative jack of all trades and one of the artistic coordinators at MetX. Mainly active in the circuit of professional theatre, he works as a director, actor, playwright, scenographer, set and light designer and pedagogue. He also coordinates urban and participatory events, like Zinneke Parade, Cantania/Bozar and Fête de la Musique.

From 1994 till 2010 he leads his own music theater company Théâtre Tirasila, for which he makes the creations ‘K–Bel, ballade van een spookmijn‘, ‘ Ubu roi ‘ and ‘ Slachtwerk ‘. Since 2010 he’s active as an actor and a director for the company Fabrique Imaginaire (Hunstadt & Bonfanti).

In recent years he has created shows and events for numerous art festivals in Flanders, like OdeGand, 30CC Ouvertures and Canta Luna in Leuven or Stadsvisioenen Mechelen. Not to forget his involvement in some of Brussels’ main cultural events, like the celebrations of Brussels European Capital of Culture 2000 and the past 4 editions of Zinneke Parade.

During the 2018 Parade, he and guerilla percussionist Jo Zanders from Leuven create BRUiTAL. A brutal bunch of underground noise makers startling festivals across Europe with their vibrant punk energy.

Vital also has a strong social engagement. He organises several events for the citizen initiative Hart Boven Hard, like La Grande Parade in 2015 and the Christmas variety show Tina & Tamara in 2018. Together with residents from the Brussels neighbourhood of Les Marolles, he creates projects like MegafoniX, la Fête de la Musique and the Mexican Dia de Muertos.