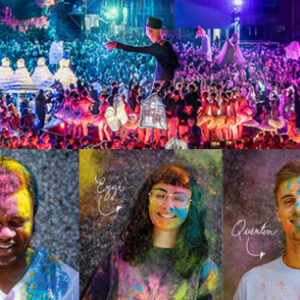 On Saturday 24 September, the urban opera Décrocher la lune will take place in La Louvière. For the music, the new artistic direction calls on Laurent Blondiau and MetX. Laurent composed the entire soundtrack for the event and will perform it together with an ad hoc ensemble, reinforced by the Orchester Lunaire (La Louvière), Bakanaï (Brussels) and the New Moon project, a percussion group formed for the Zinneke Parade.

Outgrowing the concept of a large-scale urban opera, Décrocher la lune wants to illustrate the state-of-mind of La Louvière’s citizens. Building on 22 years of experience and driven by the creativity and enthusiasm of both professional and amateur artists. Under the artistic supervision of Franco Dragone, the new director Fabrice Murgia invites not only the local population, but also numerous partners from both the Center region and the rest of the country to take part in the project. Together they let this unique urban spectacle evolve into a contemporary saga about the power of imagination and the importance of resisting the world’s harshness.

A turning point in the history of Décrocher la lune

For this 8th edition, former director Luc Petit passed the torch to Fabrice Murgia, author, actor and until recently director of the Théâtre National Wallonie Bruxelles. Murgia gives the concept a new twist: for the storyline he draws on the region’s fertile ground of legends and folklore and, on the other hand, from numerous interviews with les Louvièrois. He also introduces a completely different stage concept, with 3 unique experiences depending on where the audience is situated.

The “show” on the Town Square or Place Communale. About 650 actors will feature in a monumental performance on a huge stage in front of the town hall. Among them are the musicians of New Moon, a group of 60 Walloon, Brussels and Flemish percussionists accompanied by the artists of Centre Indigo (La Louvière), DROM (Leuven) and MetX. The group was created in February 2022 under the artistic direction of Vital Schraenen and Jo Zanders and strengthened by the fantastic experience in last May’s Zinneke Parade. On September 24 they will determine the rhythm of the evening performance.

On the other side of the central Boulevard Mairaux, a cinema concert takes place simultaneously on Place Maugrétout. On a giant screen, the audience can witness the show being staged at la Place Communale. This live stream cinema will be accompanied by more than 100 musicians performing the soundtrack composed by Laurent Blondiau. Among them: Esinam Dogbatse (flute, percussion), Issam Labbene (bass), Théo Lanau (drums) and Benjamin Sauzereau (guitar), reinforced by the Orchestre Lunaire of La Louvière and musicians from our trance fanfare Bakanaï.

On the boulevard connecting the two squares, the audience can immerse themselves in the unique atmosphere of both performances, mingling with street artists who bring this strip to life.

More information about the characters from the opera, the participating artists and all partners involved can be found on decrocherlalune.eu