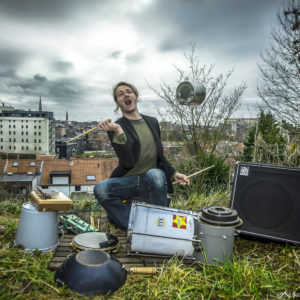 Jo Zanders is a self-taught percussionist and luthier. Driven by his passion for original grooves, mobile percussion and the street as a stage, he helped create groups like the Fanfakids, VelotroniX, DROM and BRUiTAL.

Jo finds his first snaredrum in his grandfather’s attic. He starts playing it by imitating traditional gun corps, but quickly develops a great passion for very different kinds of mobile drum groups.

During his studies in social and cultural anthropology at the K.U. Leuven, he meets Luc Mishalle and becomes a member of Al Harmoniah. In 2000, he founds the group “Fanfarrah” together with Mishalle and Michael Weilacher for the first edition of the Brussels Zinneke Parade. The Fanfakids, a group of young percussionists who transform their youthful energy in an explosive concoction of rhythms, arise in the wake of this.

At the 2018 Zinneke Parade, Jo teams up with scenographer Vital Schraenen to create BRUiTAL. In no time, this brutal bunch of underground noise makers develops a whole new soundscape, vibrating with pure punk energy.

Besides his work for MetX and its predecessor De Krijtkring (Saxafabra, Bagadski, VelotroniX), he is active in the folkscène (Göze, KV Express, Dazibao) and he plays for a young audience with Zannemie & De gang. He’s mainly active in his home base Leuven, where he’s the driving force behind De Batterij: a one-man organisation in which various percussion projects (DROM, LKMTiV, FabostatiX) and an instrument atelier are accommodated.