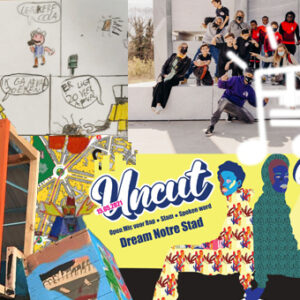 The Brussels Cosmogolem is ready for a corona-proof party! From 13 to 16 May, together with numerous children and artists, we will celebrate the inauguration of this new work of art for children’s rights. Get ready for a 4-day ‘Celebration Wave’ with a start in Genk, stops in Diest and Leuven and apotheosis on the Place de la Vaillance in Anderlecht!

In these 4 cities hundreds of children, teenagers and artists are preparing this celebration wave through the theme DREAM NOTRE STAD. With drawings, texts, videos, music and dance, they give creative shape to their wishes and dreams: “What are my deepest feelings and wishes for the future? How do we dream the city when we can meet again? And how do we transport life?”.

From 13 to 16 May, all these creative expressions will be entrusted to the Cosmogolem. During live happenings, in the open air and with groups of 50 people maximum, children and teenagers can share their inspiration about the future with the audience. The whole event will be musically enhanced by performances of the Fanfakids, Urban Center Brussel and Fabotastix. This Dream-Notre-Stad-team is always complemented by local artists, such as the U2S Dance Academy and DROM + Barabanda in Diest, slam poets Adja Fassa and Khalda El Jack in Leuven, or Ander Brass and Remork & Karkaba in Brussels.

Below, you’ll find all links and information about the events in the 4 cities. Can’t be there in the flesh? All events can also be followed via IG, TikTok and Facebook #dreamnotrestad #cosmogolemconnekt

13/05 Dag van de Cosmogolem (Genk)
On Thursday 13 May LABIOMISTA celebrates the power of children and young people with the ‘Day of the Cosmogolem’. The Cosmogolem, the artwork with which Koen Vanmechelen worldwide reaches out to local communities in their pursuit of better children’s rights, will be the central theme. The main theme of this edition is an open question: ‘How do we transport life?’’
Info and registrations

14/05 Cosmogolem Connekt (Diest)
In Diest, children and young people fill the heart of the Cosmogolem with artworks, music, dance or theatre. In this way, they share their inspiration about the city of tomorrow. The live event will be attended by 3x 50 participants from several schools in Diest.

15/05 Uncut x Cosmogolem Connekt (Leuven)
The Cosmogolem arrives on the OPEK square in Leuven. On 15 May, Uncut will set up a stage there and do a live edition outside. The line-up and open mic for a limited audience will be broadcasted in full via Live Stream. In the run-up, we are happy to post your work on Uncut’s social media and in the TRILL booth at OPEK.

16/05 Feestelijke Inhuldiging Cosmogolem (Brussels)
Together with children from Brussels and artist Koen Vanmechelen, we will wake up the new Cosmogolem during a live event for 3x 50 people! To the grooves and moves of a.o. Fanfakids, Urban Center Brussel and Remork & Karkaba, the new Cosmogolem will open its heart… and all works of art are brought to a secret place under the guidance of a colourful parade!
Info and registrations

Cosmogolem Connekt is a project by MetX, B-Classic and Studio Koen Vanmechelen, in collaboration with a network of local partners in Genk, Diest, Leuven and Brussels. With the support of the Flemish Government – Cabinet Benjamin Dalle, Minister for Brussels Affairs, Youth and Media.