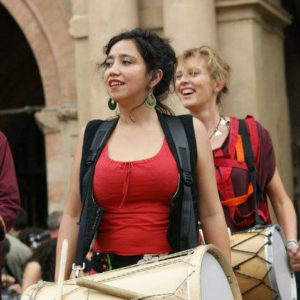 Veronica Campos is a percussionist and street art performer, with a passion for African-American music, rhythm and theater.

She currently plays in no fewer than four different groups. First and foremost Sysmo, a percussion group with 14 musicians and 1 orchestra leader, without a repertoire. They create music from scratch through a special type of sign language developed in Argentina. She also plays with Babelouze, an orchestra with mainly tubas and trombones led by Michel Massot. Since 2016, she has been running Gauma Tangué herself, a percussion fanfare from the Gaume region. And together with a singer / pianist plus a double bass player, she forms the ladies trio Ix Balam.

As a multi-talented musician, she has earned her spurs with several other ensembles: Ô Quel Dommage!, a tragicomic and burlesque theater company playing without text. Venuzia, a women’s fanfare experimenting with voodoo, samba and Afro-Cuban rhythms. She participated in the parades of the Magic Land Théâtre and also played at the Brussels samba school for 10 years. She was part of the first Brussels batucada, a type of percussion group that plays a subgenre of the Brazilian samba of the same name.

After having played in some successful MetX projects like Bagadski, Gankpo and VelotroniX, she coordinates the Dance of the Quetzalcóatl together with Israel Alonso since 2019.