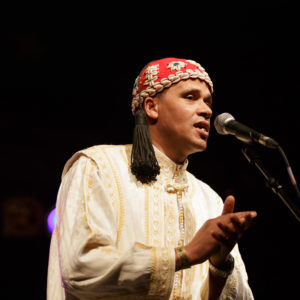 Driss Filali, born in ’74 Fes (Morroco) born as a son of a Mâalem, Mâalem Selam, grew up in a neighbourhood where the gnawa-culture was omnipresent. Since he was a kid, he played  with his father and his nephew, Mâalem Hamid. Together they play at different lila’s in Morroco and in fesitvals in France and Belgium.

As a Mâalem, Driss masters the singing and the guembri to perfection while he also plays the qraqebs and the t’bel.

In 2005, he played at the international gnawa festival in Essaouira with his nephew.
In 2007 Driss comes to Belgium for a musical project and he eventually ends up settling here.
He gets to know Luc Mishalle, who proposes him to join the group Marockin’ Brass.

In 2009, he joins the group Karkaba, a MetX project. He teaches music and gnawa culture to youth and adults.

Once or twice a year Driss gets asked to play at lilas in Brussels. He aslo plays at weddings through Europe, concerts and other festivities. With Marockin’ Brass he travels through France, the Netherlands and Belgium.