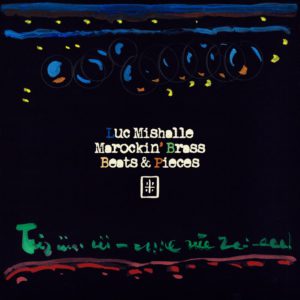 After years of playing with the Moroccan community of Brussels, jazz musician Luc Mishalle knows every trick of the cross-fertilization of gnawa music, jazz & brass. You can find out for yourself on Beats and Pieces, the new album of his gnawa-jazz band Marockin’ Brass.

For this new release the band worked together with Tunisian producer Sofyann Ben Youssef and Roel Poriau (Think of One, Antwerp Gipsy-Ska Orkestra). The ‘beats’ refer to the drums of Poriau, who has a more prominent style, and the pumping Arabic basslines are the trademark of producer Ben Youssef (Ammar808, Kel Assouf). It was also the first time that Marockin’ Brass worked with a producer. Luc Mishalle: “Working with Ben Youssef was an eye opener to us, as we started to interpret our compositions in very different ways.”


“The album is significantly less ‘jazz’ than past collaborations with Byron Wallen and Trevor Watts,” explains Mishalle. “It’s based on traditional gnawa songs I transcribed and arranged in countless sessions with gnawa and guembri lute master Driss Filali (Gnawa de Bruxelles, Karkaba) who shared his vast repertoire.”

A grooving mix of gnawa and brass, interlaced with the greatest respect for both traditions

Half of the songs contain vocals, which make it more radio-friendly. Let’s also note the Beninese traditionals Mishalle composed over the years during tours with AGO! Benin Brass.

This West-African connection brings us to another red thread through the album: trance. One can especially find it in gnawa music and also in Benin, the cradle of voodoo. “Trance music aims to create obsession through constant repetition. We kept the essence of that music, adding jazz and brass colours,” concludes Mishalle.