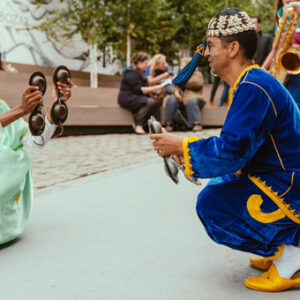 Flemish Minister of Culture Jan Jambon had Karkaba added to the Register of Inspiring Examples of intangible heritage. Through this training programme around gnawa culture, people of all ages, sexes and origins can familiarise themselves with traditional gnawa music, dance and singing.

On the advice of an expert committee, Minister of Culture Jan Jambon added several initiatives from the Brussels gnawa scene to the Register in January 2021. What is unique about this community, the largest outside Morocco, is a style of music that is partially free of rituals and religious codes. It is also open to young people who have no ties to the traditional gnawa community. Collaborations with musicians from other music genres create interesting crossovers, which brings a renewal of the genre.

As an inspiring example of this openness and cross-pollination, the register mentions Karkaba, our training programme around gnawa culture. Under the guidance of mâalem (music master) Driss Filali and Mohamed Saïd Akasri, people of all ages, genders and origins can familiarise themselves with traditional gnawa music, dance and song. Once they have mastered the basics, they can join brass band Remork for performances and exchanges with other music styles.

Gnawa music is a group affair. The corona crisis has therefore had a very big impact on the safeguarding of this heritage: since March 2020, virtually all weekly rehearsals and concerts have been cancelled. To compensate somewhat for this, last summer extra workshops with Karkaba were organised at partner organisations in Molenbeek and Brussels City as a part of VGC-StaycationBXL.

Despite a rather complicated year 2020, the gnawa of MetX have plenty new projects this year. They have just released a tutorial video for their song Thissizit, on March 21 they will participate in Musikaa, a project of Klarafestival in collaboration with the municipality of Molenbeek, and they will also release 3 new tracks this spring.