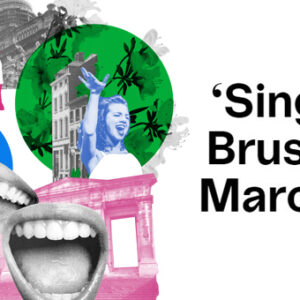 MetX, CC Bruegel and Bozar present an exciting new edition of Singing Brussels, organised as part of the Fête de la musique! On Sunday 19 June, you can enjoy a musical tour across singing concerts in the Marolles, that will end with a large participatory concert in front of the Palais de Justice.

Feel like welcoming the summer together with us? Join Singing Brussels Marolles to discover the chaabi world of Laïla Amezian and the joyful onomatopoeia of Olivier Thomas, both accompanied by brass bands conducted by Laurent Blondiau. To top it all off, you are invited to raise your voice and sing along to a new piece composed especially for the occasion. Let’s zing ensemble!

Choir > Join the musical tour and sing your own repertoire on a fixed spot in the Marolles. Next, you can sing along to a new piece composed especially for the occasion during the final concert in front of the Palais de Justice. More info via margaux.fabris@bozar.be

Open for all > For the last song of the final concert, we invite amateurs, professionals and those curious to raise their voices and sing along! During rehearsals at Bozar, Laïla Amezian and Olivier Thomas introduce everyone to their polyphonic universe and teach the song.

Register for the rehearsals at Bozar