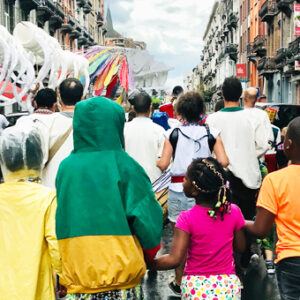 No time to rest in the nest for our giant snake! After several summer parades, this autumn the Quetzalcóatl meanders crisscross through Antwerp, Ghent and the Marolles. With in its tracks pupils of primary school De Luchtballon from Merksem, Ledebirds from Ghent and Remork & Karkaba.

The migration of our mythical giant snake takes place as part of the Big Bang Festival. This adventurous music festival for children unfortunately had to cancel a lot of editions this year. In spite of this, the organisers still want to start a Dance of the Quetzalcóatl at some locations. Through their NOMAD project, they’re facilitating collaborations between MetX and local partners from Antwerp and Ghent.

From 24 September onwards, workshops will take place every Thursday with pupils of primary school De Luchtballon in Merksem. Vital Schraenen, Veronica Campos, Israel Alonso, ex-Fanfakid Jalel Belkir Vangoethem and Brigitt Van de Wouwer work on percussion music, parade, costumes and grime. On 30 October, there will be a parade with participants of the workshops plus musicians from Remork & Karkaba.

At the beginning of October, the snake and its artistic company will also settle down in Ledeberg for a simultaneous series of workshops. This time with the youngsters from the local schools and the Takkenorkest, in preparation of a performance in De Bijloke in Ghent on 14 November. The Ledebirds and Remork & Karkaba will also be present.

In between Antwerp and Ghent, the caravan also makes a deviation via Brussels. On Monday 2 November, Dia de Muertos will light up the Marolles again. Born out of the 2019 edition, the mythical giant snake can’t ignore this working-class district during this Marollexican festival of the dead. Moreover, given the circumstances, this year’s edition promises to be particularly subdued, fervent and intense.plaats.